Welcome to the second week of the gratitude project! This prompt has been on my mind lately, as I have considered the season that follows Advent. We don’t say much about it in our tradition but I love the idea of celebrating a season called Epiphany! Epiphany in Greek means manifestation and it often is associated with the wise men’s journey to see the baby Jesus. We find this account in Matthew chapter two where we are told: “Now after Jesus was born in Bethlehem of Judea in the days of Herod the king, behold, wise men from the east came to Jerusalem, saying, “Where is he who has been born king of the Jews? For we saw his star when it rose and have come to worship him.” (Mat 2:1-2 ESV)

What follows is the account of Herod scheming to kill all male children under the age of two. The wise men left Herod and continued to follow the star. They found Jesus when the star they had been following stopped over the place of his birth. And they bowed down and worshiped Christ as king. It had been revealed to them that He would be a gift from God.

We use the word epiphany today to describe what we think of as an “aha” moment. We were blind to something, and suddenly we see. What was blurry has become clear. What had been darkness, now is light. And to set that into the context of our faith, we experience an epiphany when we have a personal experience of God. So, this week, let’s thank God that He has revealed himself to us in Christ. As Paul in his letter to the Colossians said: “For in him all the fullness of God was pleased to dwell, and through him to reconcile to himself all things, whether on earth or in heaven, making peace by the blood of his cross” (Col 1:19-20 ESV). 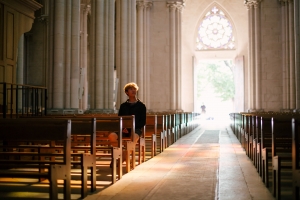 May this week be a celebration of how God manifested Himself to us, both corporately and individually. Take a moment (or several) and remember how God revealed Himself to you in your conversion, in your baptism, in your formation as a Christ-follower.

Personally, I can remember so many ways through the years, when my eyes were opened to Christ as a Person. There was one moment long after I had become a Christian. I was about 30, pregnant with Rachel, and my life was a mess. I was deeply insecure about my place in the world around me, especially in the church. I was insecure in so many of my relationships, wondering if I had anything to offer anyone. Looking back now, I can see that the circumstances of my early life were impacting my world in the here and now. I was living out the memories of an alcoholic mother, my father’s early death and the deep sense of loneliness I felt all the time. But God broke into that and revealed to me the depth of the work of Christ on my behalf. It was like waking up after a long terrible dream. The gospel, the good news came home to me in ways I had not experienced in my conversion or baptism. Christ revealed Himself to me as One who had come, suffered and died for my sin, for the sins of others against me… for the sin of the world. I could honestly and firmly say I had an epiphany, a manifestation of the Presence of God! Even as I write this, I am filled with such thanksgiving for the Light that came into the world in Christ.  (“And the Word became flesh and dwelt among us, and we have seen his glory, glory as of the only Son from the Father, full of grace and truth” (Joh 1:14 ESV)). The glory of God in Christ is the manifestation of all of who God is, His holiness, His grace, His love. This week, as you express your gratitude for the Light of the World, may you too, have an epiphany that is transformative!

Thank you for participating in the gratitude project!

12:30, lunch hour at @BurgerKing on the Ohio Turnpike. One guy working the line and the grill! #shameonyou #FirstWorldProblems
- Wednesday Aug 21 - 4:44pm

RT @CSLewisDaily: “Since it is so likely that children will meet cruel enemies let them at least have heard of brave knights and heroic cou…
- Thursday Oct 9 - 1:55am